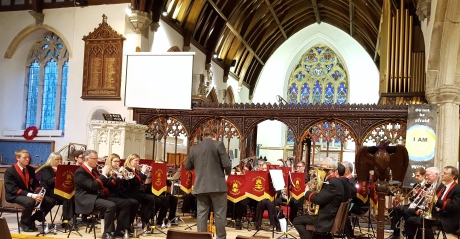 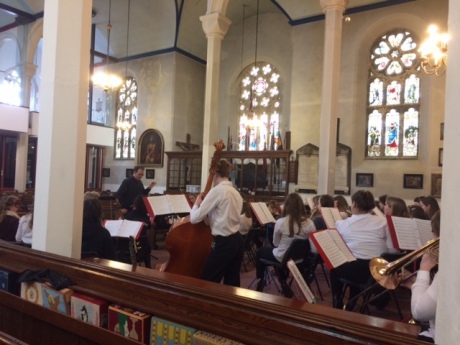 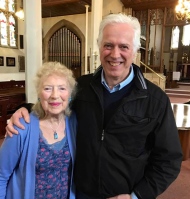 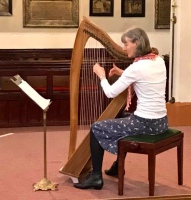 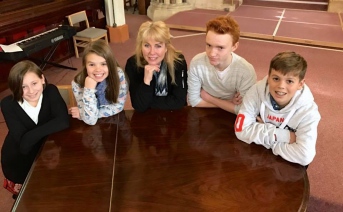 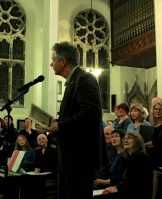 In the five years that South Devon Singers have been running the Teignmouth Classical Music Festival, says Festival Director Rachael Shearmur, it has been very interesting to “spot the theme”! We make sure that we are familiar with the work of the artists whom we invite to perform but do not give them any direction as to which pieces to include, generally also giving them free rein on style and genre, so long as overall the Festival has a different feel from the town’s Jazz or Folk Festivals. So much beautiful music, just as most things in life, has a mixed pedigree, that it becomes not just impossible but also limiting and counter- productive to seek to pigeon-hole.

Two years ago we were treated to three very different renditions of Grieg’s “In the Hall of the Mountain King” (piano, handbells and Youth Orchestra). This year the theme which naturally emerged was Romeo and Juliet. Most obviously their story was told in the powerful, visceral and utterly spell- binding performance by Pop-Up Opera of Bellini’s “The Capulets and the Montagues” at Teignmouth URC. Juliet’s aria also featured in Red Earth Opera’s engaging and varied “Night at the Opera” at Chudleigh Parish Church, though in a different guise, Bellini having recycled a number of melodies from an earlier and overall less successful opera, “Adelson e Salvini”. He is reputed to have written “The Capulets and the Montagues” very much against the clock, in the space of just six weeks in 1830!

An extract from Tchaikovsky’s score for the ballet “Romeo and Juliet” featured in the Exeter Youth Orchestra’s concert at St Michael’s Church when once again they – almost literally, but not quite – brought the house down with their verve, enthusiasm and sheer joie-de-vivre!

An altogether different and beautifully tender rendition was given by the Gioisca Trio (piano, trumpet and soprano) when they performed “Make of our hearts one heart” from Bernstein’s West Side Story – the updated version of the tragic lovers’ tale, with the Sharks and the Jets taking the place of the Montagues and the Capulets.

There were of course many more delights on offer throughout the two weekends of the Festival, unconstrained by this naturally-emerging theme!

The Festival opened with the South Devon Singers’ own concert on the theme of water, featuring original songs by David Haines, the choir’s MD and Festival composer-in-residence, including the premiere of “Plastic Planet”, based on an article which appeared in New Scientist in January

The Festival was also pleased to welcome back an old friend, double bass player David Heyes, who delivered a wonderfully mixed programme with soprano Sarah Poole and flautist Michelle Underwood in the intimate and welcoming surroundings of Old Java Coffee House.

New to the Festival this year was the Torbay Symphony Orchestra, making use of the space afforded by Teignmouth’s splendid Pavilions Theatre. Their concert featured music by Debussy, Schumann and Bartók, with young cellist Benjamin Tarlton. The audience was also treated to an unexpected but fascinating introduction by their MD, Richard Gonski, complete with illustrations from the different sections of the orchestra, to help with appreciation and understanding of how Bartók’s Concerto for Orchestra had been composed.

Another splendid group making their first appearance at the Festival was the City of Exeter Railway Band under the direction of Graham Eaton. They brought the Festival to a close at Chudleigh Parish Church with a vibrant and uplifting programme of music, some specifically composed and some arranged for brass band. In the audience was the 8 month old daughter of one of the band members – probably the youngest of the Festival’s appreciative aficionados!

St Michael’s Church, to whom South Devon Singers are especially grateful, hosted many of the events, including the ever-popular mini- recitals which give children in particular, but also venerable ladies (and gentlemen should they wish to), the chance to perform in a welcoming environment. The age range of participants in the recitals this year was indeed the widest we have seen, from 9 year old Grace to 89 year old Jo Collett.

The St Peter’s Singers of Exeter Cathedral under the direction of newly- appointed Assistant Director of Music Timothy Parsons and accompanied by organist Dr Peter King, formerly of Bath Abbey, concluded St Michael’s participation in the Festival by restoring the building to worship with an uplifting and resplendent choral evensong.

Last but by no means least, the Oystercatcher’s Café were key Festival participants, once again, in hosting both the Teign Piano Trio in their ever- popular à la Palm Court Saturday afternoon tea-time entertainment and classical guitarist David Bailey in his Sunday lunchtime recital.

South Devon Singers would like to express their gratitude to all the venues which enabled the Festival to take place and which hopefully, in their variety, allowed everyone to feel fully at home somewhere: cafés, churches and the new theatre.

They would also like to thank Teignmouth District Council, Teignmouth Town Council and the Exeter & District Classical Music Trust for their invaluable financial support.

Next year’s Festival will take place over the weekend of Friday 9th to Sunday 11th March 2018 in Teignmouth and on Saturday 17th and Sunday 18th March 2018 in Chudleigh. 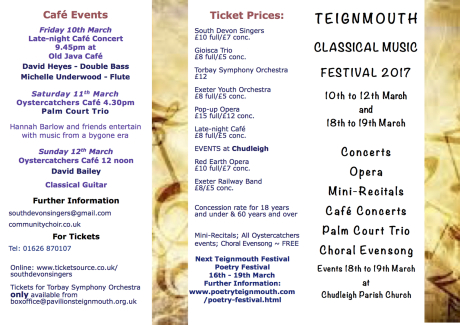 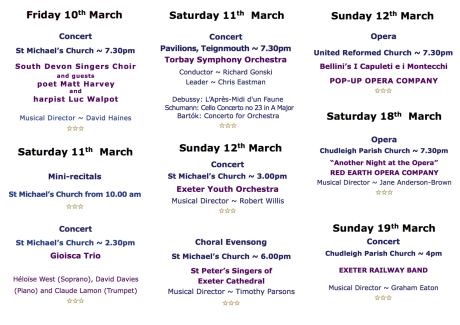 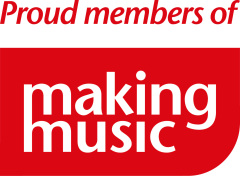